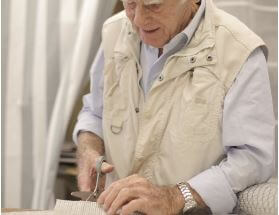 It has been a long journey of healing for John, a prostate cancer patient. With many health issues occurring all at once, he was seeing several different doctors, but he just wasn’t feeling any better.

“I have a history of health problems,” John says. “I had such a bad experience with the other doctors. They were going through the motions, but they just didn’t seem to care.”

After a misdiagnosis and switching medications multiple times with other doctors, his wife, a nurse, encouraged him to make a change. He says his direct path to healing truly began when he first set foot in the lobby at The Urology Group.

“I knew immediately this was going to be a different experience when even the security guard at the door greeted me,” says John.

On one of his office visits, he shared an elevator ride with a man who asked how he was feeling. As they parted, John learned that the man was President of The Urology Group, Dr. Gary Kirsh.

“From the security guard to Dr. Robertshaw, Dr. Rousseau, and Dr. Grass, all the way to the very top doctor running that place, The Urology Group made me feel like I was the only patient they had. I know they’ve got hundreds of patients, but that’s how they treated me,” says John.

John feels as though The Urology Group surrounded him with a whole team committed to his well-being.

“I am a true believer in The Urology Group!” John proclaims.